Happy Sunday everyone! I hope you all had an amazing Thanksgiving and participated in the OptOutside project like I did! This was the 4th year I did not get to spend Thanksgiving with my family back in Kennewick, WA but unlike the previous years, I spent my Thanksgiving doing something I love to do. I wanted to spend the day hiking, but I wasn’t sure what trail I wanted to do. There are so many trails in SoCal and I wanted something with incredible views but something different from what I’ve done in the past few months. At first, I was considering doing the San Bernardino Peak to cross it off my list; but, as I scrolled through my Instagram feed I kept seeing pictures of Mount Baden Powell. This peak looked beautiful, and I wanted to see it for myself. I must say; this hike was the most thrilling yet scariest hike I’ve ever done.

On Thursday morning, we embarked on an amazing adventure, I say we because two of our Cal Lu Hikes members (Jakob and Percy) joined me! We met up around 7am and headed to the San Gabriel Mountains! As I was driving through the mountains, I realized I wasn’t sure where the trail-head was going to be, mainly because my phone lost signal and Google Maps wasn’t working. After driving for a few minutes I decided to just find parking and hike any trail, I saw a sign that read “The Pacific Crest Trail” so we began hiking there. We hiked for about 15-20 minutes then realized we had no idea where the so-called trail was. Which is why we decided to go back to the car and find another trail, we drove for another 10 minutes and found another parking lot. This time, we saw about four backpackers and we decided to follow them (they seemed to know where they are going.) 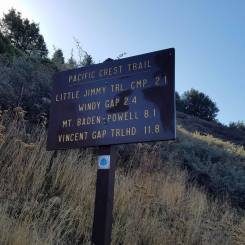 The trail-head sign read The Pacific Crest trail, and Mount Baden Powell Peak was only 8 miles away! We took this as a sign that we were meant to summit Mount Baden, but if we stayed on this trail it was going to end up being a 16-mile hike and not 8 miles like we had planned. At this point we discussed our situation… did we want to keep looking for the other trail-head…or did we just want to stay on this one? We decided to stay and began hiking around 10am. I knew we had made the right decision 5 minutes into our hike because the views were incredible. There were stunning views of different mountain ranges, the sky was nice and clear, there were trees surround us, and the weather was close to perfect. It was a bit chilly, but it wasn’t windy, I didn’t even feel the need to wear a sweater. 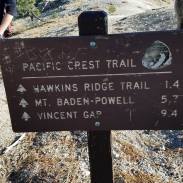 About a mile into the hike, we ran into a bit of snow, that was the first time I’d seen snow on the trees and on the floor while hiking. I was so excited, I kept asking the guys to take pictures of me with the snow. After a few pictures, we continued our hike and there were parts where the snow made the floor slippery. It was scary, I didn’t want to fall and hurt myself but I didn’t want to turn around especially since it wasn’t a lot of snow. I was scared because this was new to me, but as we continued to hike I realized it wasn’t a big deal… I was still slow but I felt confident. We followed the signs for Mount Baden Powell and as we got closer, more snow kept appearing. I felt so conflicted, I was sweating and the sun was out…but there were inches of snow, my feet were freezing cold but my forehead felt like it was tanning way too much. I was so confused. 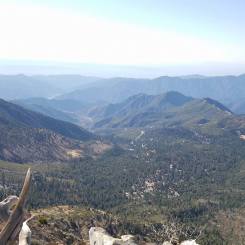 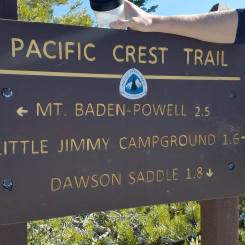 After 5.5 miles, we reached a sign that gave us hope, we were 2.5 miles away from the peak. It was close to noon at this point, we had gone that far to hike Mount Baden so we wanted to summit it. I kept wondering what time the sun would set, I wasn’t sure if it was different than usual since we were in the mountains. But we agreed that if it did get late, we would take the closest trail down to the road then take the road back to the car. We felt more comfortable walking on the road at night than through the forest with snow. As we continued to the peak, everything looked so white, my feet got numb, and I kept falling every few steps into the snow. The snow was soft and fluffy but cold, I’ve never had to deal with that much snow. The guys were way ahead of me and I kept struggling as I tried to keep up. After falling over 50 times, having numb hands, and feeling all sorts of emotions we finally reached the peak! And I am happy to say we did it, we got a view of what appeared to be all the San Gabriel Mountains. We met some people who pointed out Mount Baldy, it was stunning. 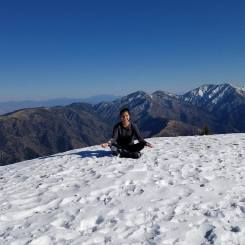 We didn’t stay at the top for long because we knew we were rushing against the sun to try to make it to the car before it got dark. We were going a lot faster on our way back but I kept falling behind. I kept wondering what they ate and how were they going so fast, I kept telling myself I had to eat more spinach and veggies. After a few more miles, we reached the trail that read 1.8 miles to the road, we weren’t sure how much daylight we had left so we took that route. We got to the road and decided to go left, that seemed to be the way we came from. I had no signal so I couldn’t check, my phone was about to die, we didn’t have flashlights, at this point we just hoped we were heading the right direction. I was happy with the attitudes we all had, we didn’t put ourselves down, we saw it as a great adventure, a great way to bond and get to know each other. As we walked on the road I kept wondering what the people driving past us must’ve thought of us. There were three weirdos walking down the road in the dark on Thanksgiving Day, it made me laugh because they must’ve thought we were crazy. After walking 5-6 miles down the road, we saw a parking lot from afar, we saw the car! I felt so relieved, I was so ready for the 2-hour drive back home.

Overall, yes, we could’ve prepared better, we could’ve turned back earlier in the hike, we could’ve done so many things differently… but I’m glad things turned out the way they did. I learned a lot about myself and hiking. I am very thankful to be young and healthy, to have a home to go to, and even though I didn’t have a traditional Thanksgiving feast… I am very thankful to have food to eat and a warm bed to sleep in at night. But most importantly, I’m grateful to have spent the day doing what I love the most. It was an amazing adventure.